March 16, 2014 … I had been feeling completely exhausted and having some sinus issues too, so when I started feeling nauseous I assumed it was just sinus drainage or something unpleasant.  As soon as I started telling my boyfriend why I wanted to schedule a doctor’s appointment for a possible antibiotic (as I’d been living on hot tea and cucumber sandwiches for about 3 days), his face lit up as he said “We need to go to the store real quick.”

My boyfriend had it in his mind that I was pregnant, and two pregnancy tests later I was coming to the same conclusion.  Since I wasn’t quite ready to come to that conclusion we went to Urgent Care for a third pregnancy test.

* I feel the need to explain that by no means was the thought of being pregnant the worst thing in the world, or even in the top 10, but I was completely unprepared for this news.  I had never seriously thought of the reality of having a baby, or the reality of living my life and never having a baby.  Nearly 30 years old with a fantastic boyfriend of 3 years and I found myself in an utter state of shock mixed with a bit of denial.

So we go to Urgent Care and I see the doctor who earlier in the year was a great help in my previous medical issues involving kidney failure.  Yes, it’s been quite a year.  Fortunately after 3 surgical procedures my kidney is safe and sound again.  Anyways, getting off track there, but I saw the same doctor which was an immediate relief.  After finishing the standard urine analysis  and waiting what felt like years, the doctor came back into the room and announced that I definitely was pregnant.  My boyfriend’s smile barely gave enough space for the rest of his face as he hugged the doctor and nurse that were in the room.  After sitting back down he had to excuse himself to be sick in the restroom, while I sat in complete shock trying to take in all the info the nurse was giving me regarding additional blood tests which included both pregnancy and kidney tests.  I was completely overwhelmed as we left for home. 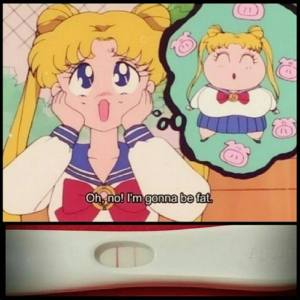 Just kidding. I use sarcasm to defuse situations.

Looking forward to:
my brain to slow down just a little bit so I can process this

Partner’s Status:
so excited that he is spreading the news and hugging everyone